Can't get enough of the Infernal Assault and Battle of Asteria modes we launched in v1.4? It seems that no sooner do we manage to put a stop to one evil Gnome plan, two more pop up in their place. In v1.5, the Gnome General Malena will launch an unprecedented attack, willing to sacrifice Gnome treasures and humanity's honor in a ferocious assault on our cities. "Malena's Ambition", a brand new event, will test your alliance like never before. Contention of Relics has also been overhauled with improved pacing, reward distribution and the new mode to challenge Chaos Beasts for a smoother combat experience. Six new skills have also been added to the Tower of Knowledge to expand your strategic arsenal. Continue reading for all the details of these latest upgrades, so you can be ready for the new challenges that await you.

How does one accomplish the twin goals of bringing the glorious light of human civilization to new places whilst defending every inch of humanity's lands from invaders? This is the dilemma you're about to be faced with.

Alliance Leaders or Officers must select a city to use as a fortification site within the Alliance territory.

Difficulty overview: The difficulty of each invasion increases with city size (ordinary city or Provincial Capital) and level. 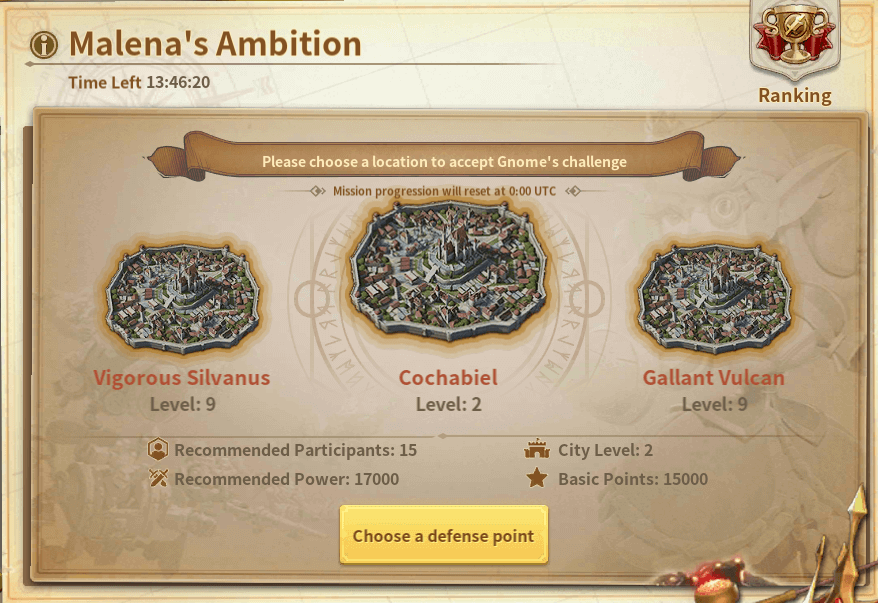 The Alliance Leader or Officers can select 6 types of defensive booster strengths: 3 here represents the maximum strength and 1 the lowest defensive strength. The lower the defensive strength rating, then the greater the bonus points given to the prevailing alliance. 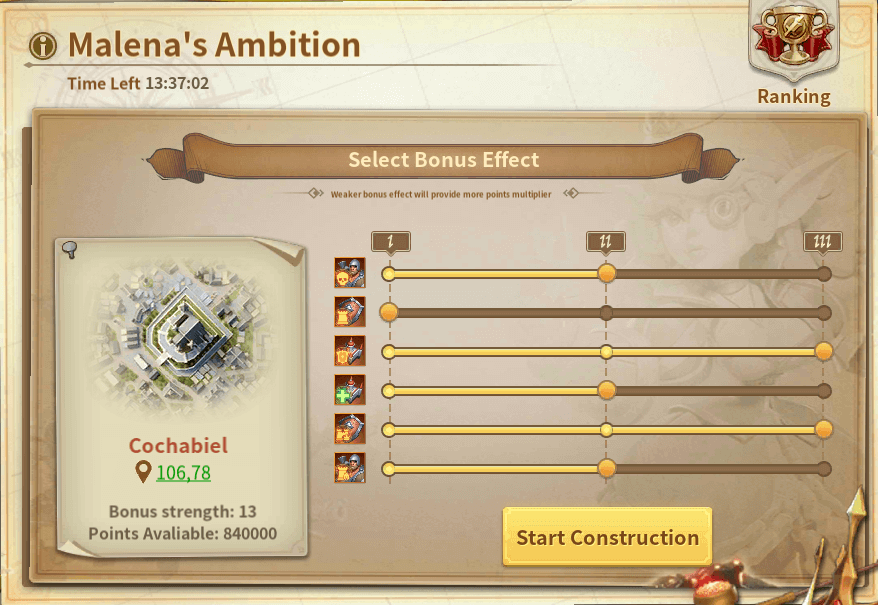 Your alliance must have completed 6 Cooperative Missions and 1 Alliance Donation Mission (the difficulties of which increase depending on the city's size and level) before the Alliance Leader or an Officer can give their consent for a Gnome Invasion to take place. Note: Invasions can take place from UTC 00:00-23:35 daily.

1) A Gnome Invasion lasts 17 minutes total. The first 2 minutes will be taken up with preparations, which will involve the activation of a Protection Barrier over your city, and the dispensation of 6 buff types and Bloody Rage effects by Lords within the area of the invasion (6km square centred around the city).

3) Alliances will have more to contend with than hostile Gnomes. Hostile Alliances may well take advantage of a Gnome invasion to do a bit of conquering, and so Alliances would do well to prepare for this possibility.

1) A defender with at least one stronghold remaining under their control once the invasion has ended wins.

2) If an invading party (the Gnomes or a hostile Alliance) seizes complete control of all strongholds during the invasion, then they will be declared the winner, and the invasion will end immediately.

3) The victor will go on to exercise full control over the city obtained.

1) Fortification Rewards: Alliances that complete 6 Cooperation Missions in total will receive a matching treasure chest and speedup reward. These rewards will be sent by mail.

3) Leaderboard Rewards: A leaderboard will rank alliances based on their respective Alliance Points. Alliance Points are calculated based on city size, level, and structural integrity. "Structural integrity" is calculated from the city's remaining health and the number of strongholds left following the engagement. Final rewards will be tallied and sent out at UTC 00:00 once the whole event has ended.

Note: Each player can only claim Cooperative Mission rewards and City Defense rewards once per day.

Keep an eye on the Event Calendar for the event times.

Each round of the event lasts 3 days with every Alliance receiving one challenge opportunity per day. The event is reset daily at UTC 00:00, following which Lords must reselect a city afterwards and complete their fortification task once again. The Alliance Leader or Officers can embark on this challenge daily between the hours of UTC 00:00-23:35.

Effect: Increases damage of 2 random allied units by X%, but reduces your damage by X%. Also has a 15% chance of increasing your Initial Energy by 100.

Effect: After entering battle, increases your Physical Attack by X%, and grants you immunity to Wound.

Effect: Every 6s after battle starts, has an X% chance of triggering Defense status, blocking all damage from 3 attacks for up to 6s.

Following the overhaul, Contention of Relics will be split into three successive phases, Chaos Beast will be a single-player mode, and Valor Marks will be assigned by the Alliance Leader. With the new early match pacing, you will have clearer objectives for each phase, more intense battles, and greater teamwork with your Alliance.

⬤Event phases (all times are in UTC)

Note: If you are already playing Contention of Relics when the update takes place, you will keep all currently unlocked content and the remaining phases will follow the rules described above. 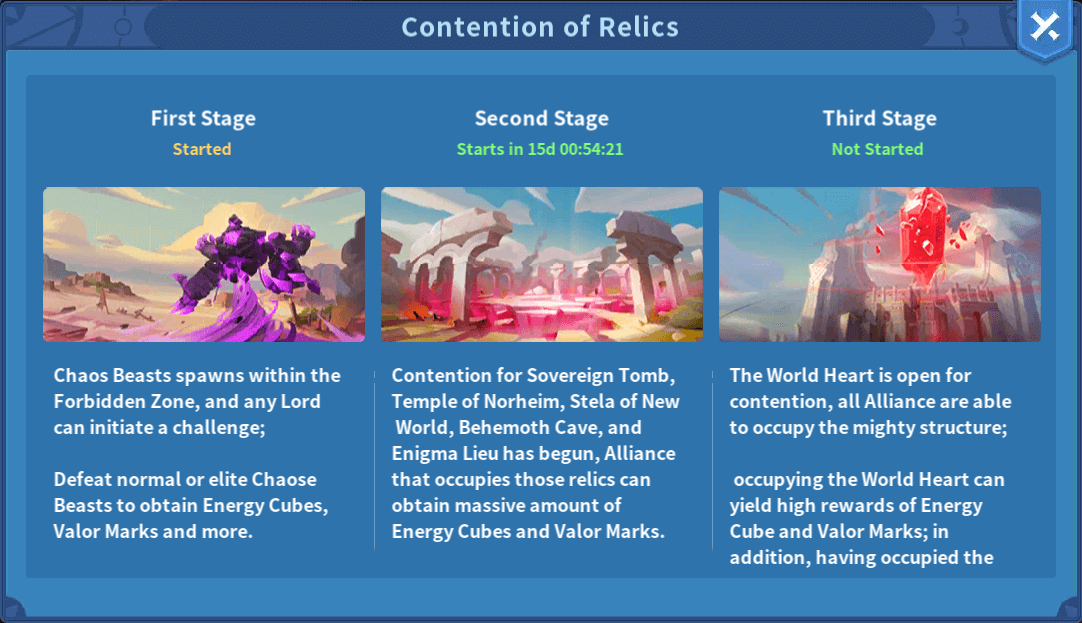 2) New buff drops: There is a chance that Chaos Beasts will drop a buff when defeated. Getting the same buff will stack the attribute effect and reset that buff's duration. The available buffs and their maximum stacks are:

- Reduces the number of troops seriously wounded by the Chaos Beast by 3% for 5 min, can be stacked up to 10 times

- Increases damage dealt to the Chaos Beast by 1% for 5 min, can be stacked up to 10 times

Note: If you are already playing Contention of Relics when the update takes place, the new rules will immediately apply to any subsequent Chaos Beast drops.

⬤Five Relics and the World Heart

Only Alliances who have occupied the World Heart during Contention of Relics may crown a King.

The Valor Mark rewards obtained by acquiring Energy Cubes will no longer be distributed indiscriminately, and will instead be allocated by the Alliance Leaders

1) Allocation time: During the closing stages of the event, the Alliance Leader can distribute all Valor Mark rewards earned during this Contention of Relics.

2) Reward distribution: Once the Alliance Leader has allocated all of the Valor Mark rewards, the system will send each allocated player a rewards message with the corresponding Valor Mark reward(s) attached. There will also be an Alliance notification message informing all members of the allocated rewards.

1) Between Alliances: The new Valor Marks leaderboard ranks Alliances based on the total number of Valor Marks they have gained from occupying relics or the World Heart during the event.

After selecting the downgrade difficulty, players will continue all subsequent levels on low difficulty without having to restart from Lv. 1.

Rewards will be issued based on the player's progress in the last challenged difficulty. If the player clears one or more difficulties for the first time, they will receive additional Progress Rewards for these cleared stages.

You will be given 3 Talent Pages for which you can customize the name and set a Talent Point allocation plan.

This is the same as resetting Talents, and costs 200 Gems. You do not have to spend Gems to modify Talent Point allocation on inactive pages. 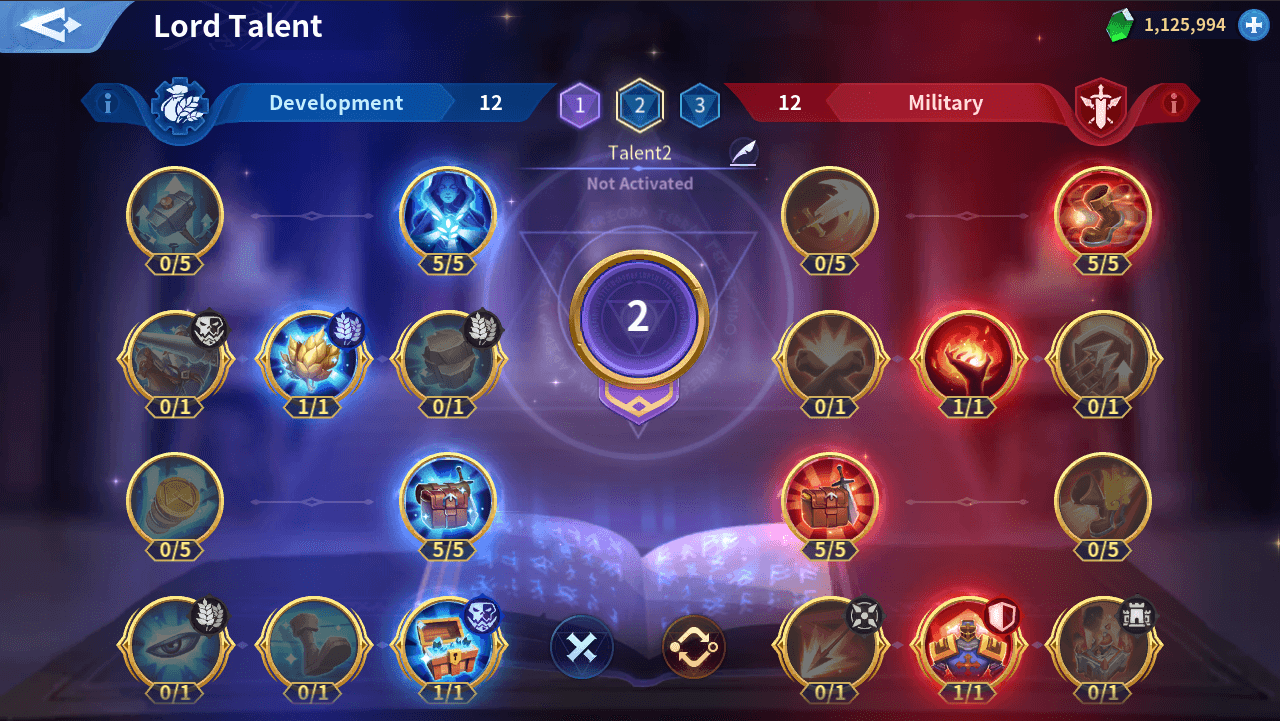 Tap the icon on the left of the Attribute to view all the attributes an artifact can randomly give in that slot. 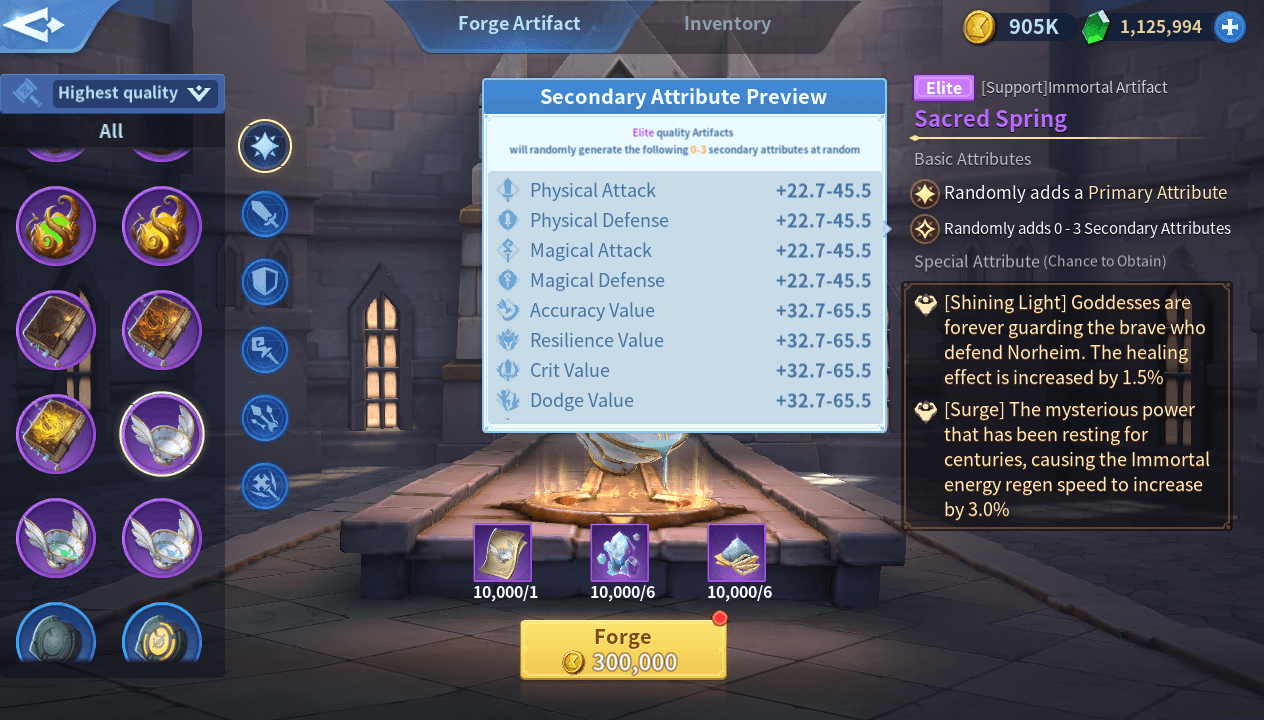 When troops have been occupied, you can go to the Shortcuts menu to view their info, speed up or recall. 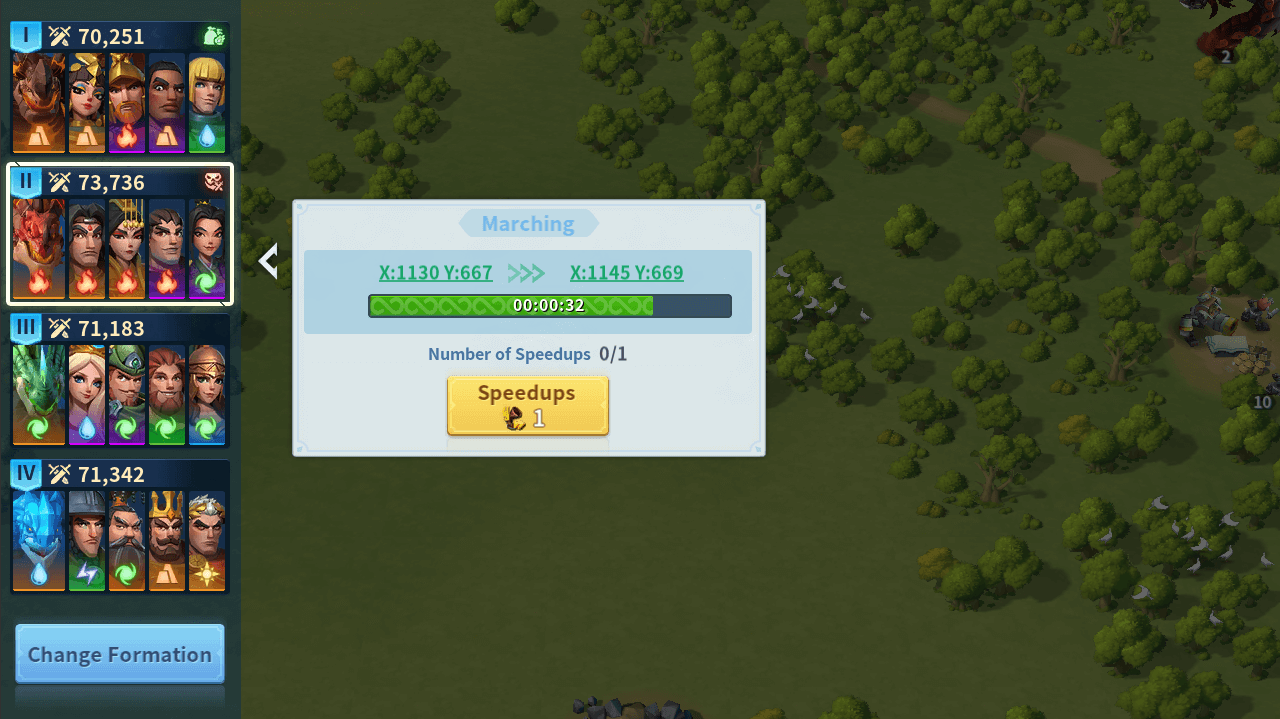 If you are the only one in a rally, you will not be able to benefit from "Fight Side by Side" Alliance technology. Instead, the effect of the Fight Side by Side will change to: Attack increases as the number of rally participants increases. 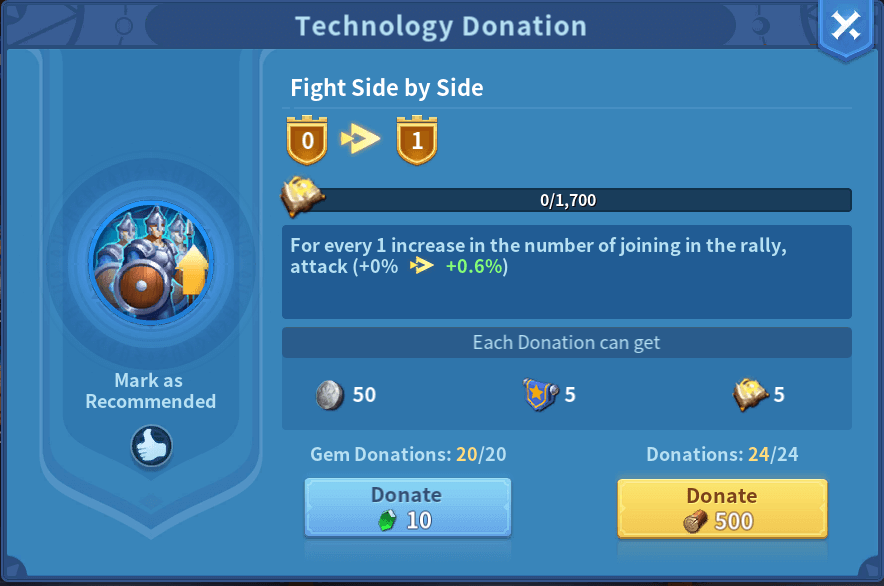 In noisy chat environments, the @ feature helps you make sure important information is seen by the person you're talking to.

In the chat channel, hold down the avatar of the person you wish to @ and wait for their name to appear in the text entry field before composing your message. When you hit send, the mentioned player will receive a notification.

Tap the @ notification to jump to the first message in which you have been mentioned.

If your Alliance does not meet the eligibility criteria, the system will now explain why.

Icons have been improved so it's easier to tell the difference between different types of building.

"Total Troop Number" has been replaced with "Highest Power" to better reflect a player's strength.

Damage caused by the Disarm effect has been adjusted according to the following ratio:

When targeted by a normal attack, the chance of the attacker being Chilled is: 25% ⇒35%

2) Chance of skill targets being Stunned upon crit:

That's all the changes coming with the 1.5 update. Thanks for reading! If you have any questions, then please feel free to get in touch with us over Facebook, Discord, VK, or any other official channels. Malena's Ambition is on fire right now, and your cities will be too if you're not careful. Are you strong enough to take her on? Share your thoughts with us on Facebook!