Since the start of its beta test, Infinity Kingdom has gained many loyal players with fascinating in-game stories, and we'll be bringing you interviews with them every once in a while! The player featured in today's interview is a popular and high-ranking player. He sits near the top of the server-wide Power rankings, and is somewhat famous within the server. He's often seen in the Arena, Sieges, or in the various chat channels. Spoiler alert: In today's interview, he'll not only share tips on increasing Power and setting up your Immortals, but also talk about his Great War Alliance mates, and stories of friendship and rivalry within the game. 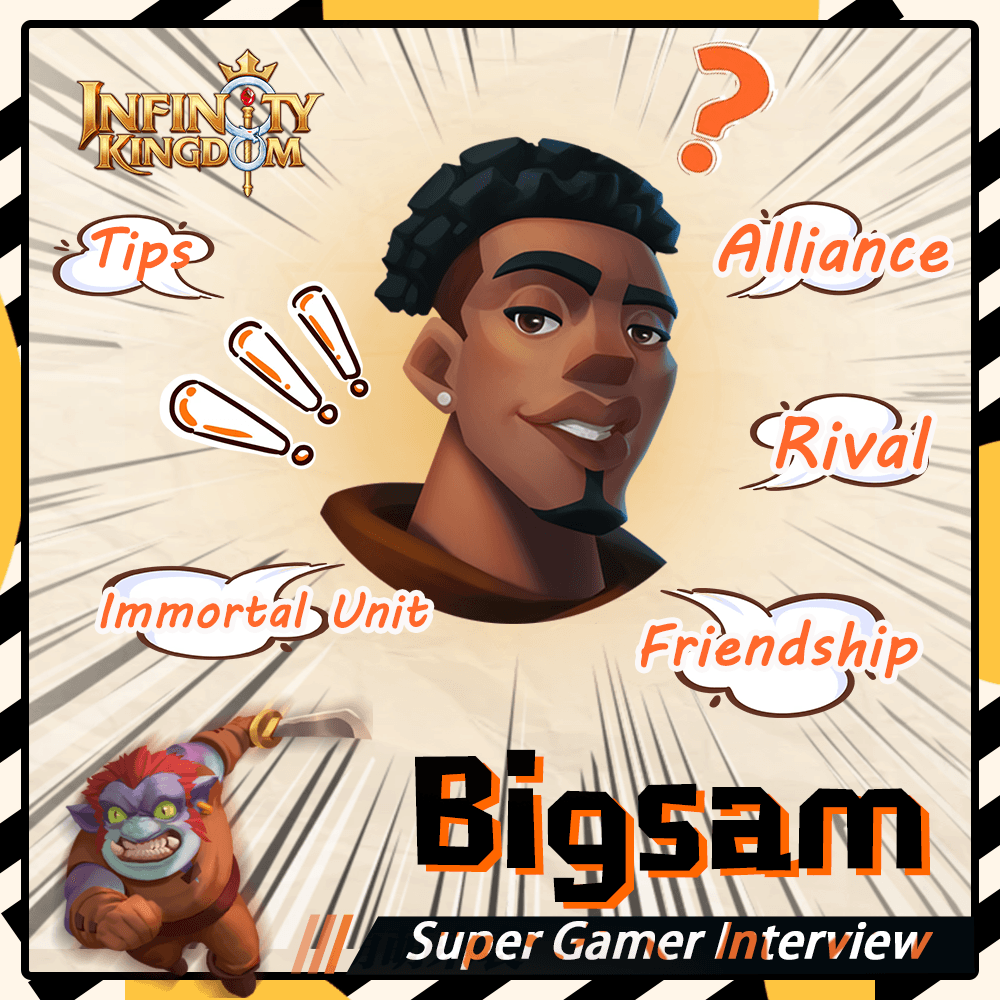 Bigsam: Hi, everyone! I'm Bigsam. I'm a veteran player who came over from Server 2, and I've been playing this game for more than 4 months now. Right now, I'm placed second on the server-wide Power rankings.

Interviewer: Hi, Bigsam! We've heard a lot about you already. Could you share with us your main Immortal units? We're all really curious about how you raised your Power so quickly!

Bigsam: Currently, my main unit consists of Attila, Merlin, Hippolyta, and Zenobia, Gilagamesh. Actually, it's a random mix that I put together by myself, haha! It may not one of the elemental units that are currently popular, but I think its overall strength is pretty high, and it does quite well in PVP. Of course, it isn't my absolute ideal setup (which of course I can't tell you about). Actually, Emperor Charlemagne is a really good Immortal. When I was on Server 2, he was my main powerhouse and is especially good during SiegesRaid. But I wanted to try something different this time around. The main contributing factor to Power is still the levels of your Immortals. So, I'll always use up all my SP to fight gnomes daily. At the same time, I focus on researching technologies that affect my Immortals or increase EXP gain. As for increasing my Immortals' Star Levels, that's mostly down to luck. I get them when they're available in the Market.

Interviewer: I see! Since you mentioned Star Levels, I wanted to ask, do you mainly get your Soul Crystals from the Market or from the Tower of Knowledge?

Bigsam: At the moment, I mainly use Soul Crystals to purchase Immortals. In the Tower of Knowledge, I've focused on learning the Instigation skill. (Everyone who's used it agrees it's great!) I leave the other skills at level 1 or 2. I'm only using them temporarily to get by, so there's no need to spend too much on them.

Interviewer: Got it! As an experienced veteran player, do you have any suggestions on how new players can increase their Power?

Bigsam: First of all, the game gives you a lot of Gems when you're first starting out, but please don't use them for speedups! If you have enough time, you should instead max out your AP and SP, and use them to level up your Immortals and upgrade their equipments. Secondly, I highly recommend purchasing Building Queue slot. They're very, very useful. Lastly, draw as many Immortals as you can and exchange them for Soul Crystals. Soul Crystals mean everything.

In-game experiences that have left a deep impression on Bigsam...

Interviewer: Has anything interesting happened to you in the game? Would you be willing to share them with us?

Bigsam: One recent story that left a deep impression was when Server 4's AQUA Alliance stole a city from us. We were fighting in a Siege, and they joined the battle at the very last moment, and occupid the city by giving last hit. The whole thing only happened because my Alliance had to wait a few minutes for me to attack the city (you can receive rewards after attacking). I really regret that incident now...

Showing love to your Alliance!

Interviewer: You're very popular in the game, and your Alliance is also a well-known and powerful one. Do you have anything you'd like to say to your brothers-in-arms?

Bigsam: Special thanks to my friends on Server 2: SRE, Hiho, Mac, Navigate, and others.  Of course, I also have to thank my friends who came with me to Server 4: MADARA, ZERO, netty, and Harley. I love them a lot, and wish them the very best, whether in the game or real life. I also want to thank my current opponents: Zombie, KS, Ddog and FarmouZ

Interviewer: Which opponent or friend are you most looking forward to facing? Is there a story behind it?

Bigsam: Without a doubt, my main opponent is Zombie on Server 4, who was previously known as TIMO on Server 2. When we were on Server 2, we were always fighting to decide who would be the Supreme Alliance. The outcome was clear. I managed to win, somehow. But I never thought he would also come to Server 4, and we would become rivals once again. Maybe it's fate or destiny. But I'm genuinely grateful to him for pushing me to constantly improve in the game. Perhaps one day, one of us will decisively defeat the other, but that day will be a great day for both of us. To me, that's nothing less than a true bond.

Finally, do you have criticisms for the developers?

Bigsam: The game is pretty good; it's the kind of game I like. But a lot of people have been saying there's not enough strategy, and so on. Hopefully, some other game modes could be added.

That's the end of our interview with Bigsam! Can't get enough? Is there anything in Bigsam's tips that you disagree with? Do you have your own in-game stories you want to share with us? We will continue to conduct player interviews, and all interviewed players will receive Epic Immortal Chest x1, Advanced Speedup Chest x3, and Advanced Resource Chest x3. Apply now!

How to apply: Contact administrator PiouPiou on our official Discord channel