The red carpet to the Throne of the Supreme is unfurling... Version 1.6 brings a huge amount of new content, including new Immortals, new languages, and new game modes. The Norheim Survival Guide will guide your path with detailed information and friendly tips. The Golden Path will stand as proof of your dedication and grant marvelous rewards. Daily Talks will collate all the latest rumors, stories, and wisdom from around Norheim. We have optimized the difficulty and rewards of Malena's Ambition, the Battle of Asteria, and other events to bring you a better experience. We've also added a replay feature to the Illusion Battlefield, allowing you to look back on all your battles. Battle Reports now have a brand new look, with more details and visualizations. Continue reading for all the details of these latest upgrades, so you can be ready for the new journey that awaits you.

1. Throne of the Supreme

After the Throne of the Supreme tournament opens for the first time, it will be held once every 50 days. In this tournament, Lords from different servers will gather together to battle for supremacy.

Lords Lv.11 and above from servers which meet the following conditions will be eligible to take part in the Throne of the Supreme competition: 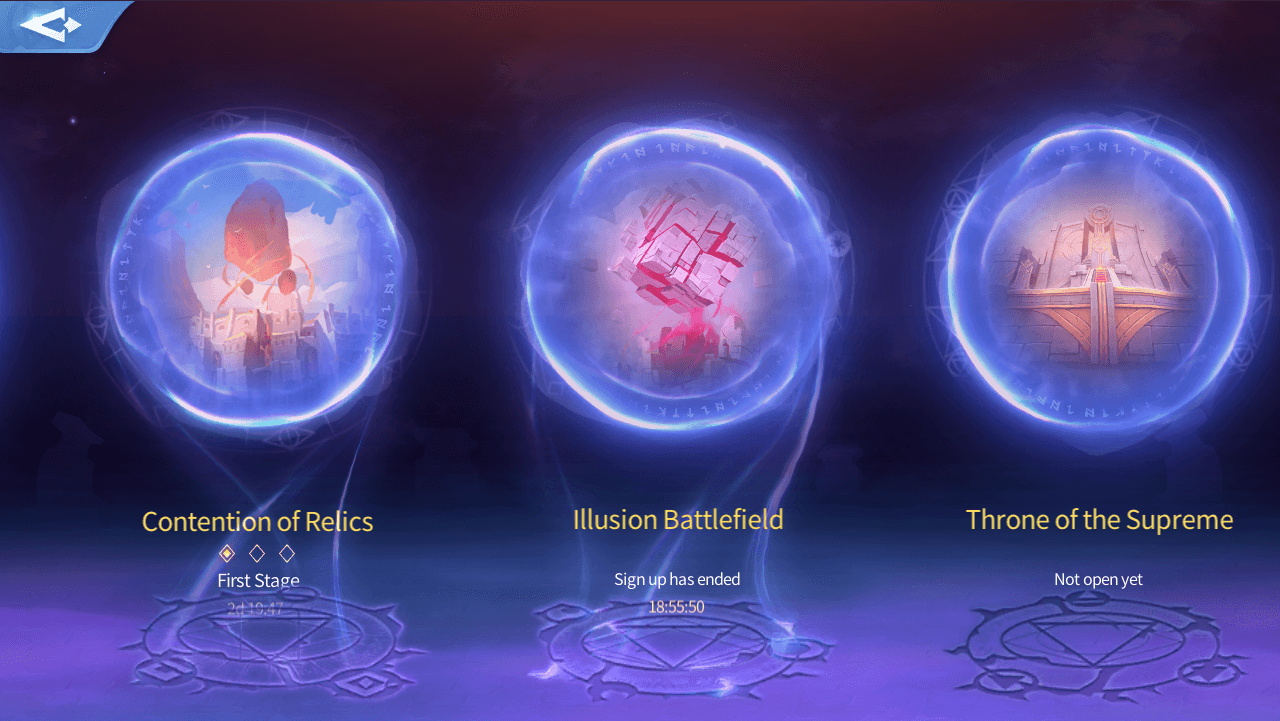 Throne of the Supreme is split into four rounds. There will be one day for resting between every two stages on which Lords can reorganize and prepare for the subsequent rounds.

1) Regional Point Race: Two servers will be grouped to form one region. All participants will then compete for 14 days. At the end of this round, 64 Lords from each region will be promoted to the next round.

2) Inter-Regional Group Match: Two regions will be combined to form one inter-region. The 128 participants will then be split into groups of 8 and compete for 7 days. The 4 strongest Lords in each group of 8 will be promoted to the next round.

3) Inter-Regional Elimination: All Lords promoted from the previous round will compete for 6 days. At the end, 16 Lords will be promoted to the next round.

4) Grand Regional Final: Two inter-regions will merge into one Grand Region. The 32 remaining Lords will engage in intense competition for 6 days. At the end, the champion, runner-up, and second runner-up of the Throne of the Supreme will be born!

The first day of each round is a rest day. No competition will be held on these days.

- Rules: Each Lord will have 10 chances to challenge other Lords per day. You will earn points if you win, and lose points if you are defeated. The number of points won or lost depends on the difficulty of the selected opponent.

- Promotion: When the round ends, the 64 Lords with the highest scores will be promoted to the Inter-Regional Group Match.

- Rules: Participants are divided into 16 groups of 8 Lords each. Lords must engage in two matches with each of the 7 other Lords in their group. Each match is played as a best-of-three (first to win two battles wins the match). Winning a match earns you 3 points. There is no point penalty for losing.

- Promotion: Participants in each group will be ranked based on their score. When the round ends, the top 4 Lords in each group (a total of 64 Lords) will be promoted to the Inter-Regional Elimination.

- Rules: During the first four days, participants will be divided into four groups of 16 Lords each. Within each group, Lords will be paired up in elimination matches. The top 4 Lords in each group will be promoted to the Grand Regional Final. Each match is played as a best-of-five (first to win three battles wins the match). The winner advances, while the loser is eliminated. During the last two days, the top Lord in each group will face off to determine the champion, runner-up, and second runner-up of each inter-regional group.

- Promotion: At the end of this round, the 4 strongest Lords from each group (a total of 16 Lords) will be promoted to the Grand Regional Final.

- Rules: During the first four days, participants will be divided into two groups of 16 Lords each. Within each group, Lords will be paired up in elimination matches. Each match is played as a best-of-five (first to win three battles wins the match). The winner is promoted, while the loser is eliminated. During the last two days, the top 2 Lords of each group (a total of 4 Lords) will face off to decide the champion, runner-up, and second runner-up of the Throne of the Supreme tournament!

2) Unit Settings: Each Lord can set a formation containing three Units. This formation will be used for both attack and defense. Before each round starts, you must set formations for all the matches in the current round. To avoid cases where a Lord forgets to set a formation, a default formation will automatically be set at the start of each round. Please refer to the in-game instructions for detailed rules on the default formation for each stage. If you need to change your formation, please make the necessary preparations beforehand.

1) Opening Time: Lucky Guess will open at the start of the Inter-Regional Group Match.

2) How to Guess: You can use Lucky Amulets to make a guess on who will win each match. If you guess correctly, you will win rewards. 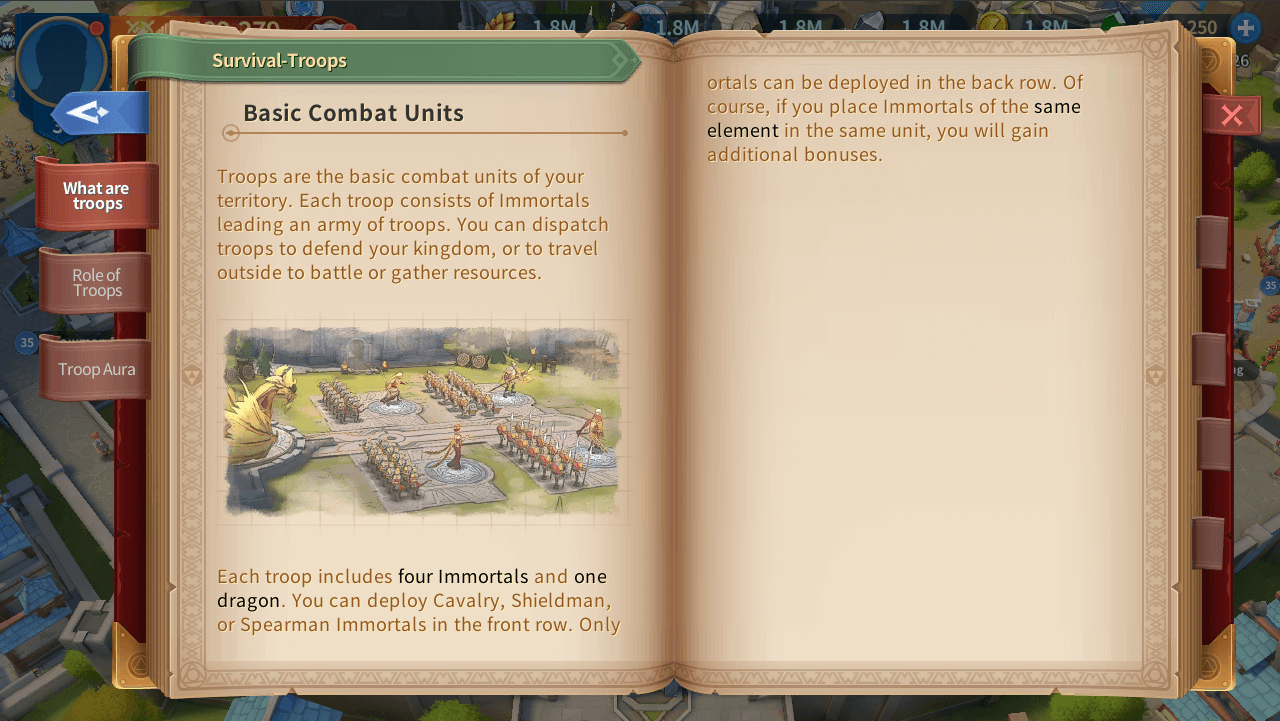 ⬤How to Access: Tap the Market and the new Golden Path icon will pop up. Tap this button to open the Pass.

⬤How to Upgrade: You can obtain EXP needed to upgrade the Pass from missions, or by purchasing it directly. After upgrading the Pass, you will receive the corresponding reward items, including Coins of Merit. (Coins of Merit are permanent and do not expire.)

We have created this new platform to record and share the various happenings around Norheim. Press Officers from various servers will share text, images, and videos here, providing news about strategy, daily happenings, and the war to restore Norheim... Whether you're a writer or a reader, there's bound to be something fun for you here.

The Bulletin has been renamed to the Echo Pavilion. Tap this building and Daily Talks will be one of the buttons that pops up. Tap it to enter Daily Talks.

On the Daily Talks panel, tap the “Become a Press Officer” button to view the requirements for becoming a Press Officer, and to apply to become one. We will process your application within 7 working days.

⬤Energy Skill: Sun Flare. Gain control immunity and channel a dazzling light for 18 seconds, the light increases dodge rate to all allies by X% and removes all negative effects to a random ally once every 3 seconds. After the spell channeling is complete, cause physical damage (damage rate Y%) to all enemies until the battle ends. Energy will no longer be gained after the spell is casted.

You can now set the game's language to Arabic or Korean. To change the language, tap your avatar, then select Settings > Languages.

⬤Adjusted Reward Allocation: Rewards for a successful or failed defense are now allocated based on personal contribution.

⬤Participation Reward: Players who participated Malena's Ambition but have not gained any personal contribution will obtain a participation reward.

⬤More Rewards: Added the Artifact materials dropped by monsters in the Solo Challenge.

Tap the History button in the upper right corner of the Illusion Battlefield panel, then select a battle and press the Play button. You'll be able to watch a replay of that battle.

⬤Member List: The replay will show the list of members on both sides, allowing you to keep track of their statuses. You can also quickly move to the target's location through the member list.

⬤Statistics: You can view various statistics in the replay, including participating members, and score and Troop Power graphs for both sides.

1) Participating Members: Members on both sides will be listed in order of their Honor. You can view statistics about each member, including their surviving and dead troops, kills, and Honor.

2) Score Graph: A curve graph will show how the score of both sides changes over time.

3) Troop Power Graph: A curve graph will show how the number of surviving troops of both sides changes over time.

⬤Disband Restriction: Players can no longer disband a Rally if they are the only player in the Rally.

You can now give feedback to mail from our development team. Mail from the development team will bear a Grace avatar. Tap the heart button in the lower right of the mail to like it, or tap the paper plane button to reply with a comment.

⬤Points Shop: When you reach VIP Lv.15, the VIP Points Shop will be unlocked. You will then be able to use your VIP Points to redeem a Holy Dragon Egg and other fantastic rewards.

We have added visualizations for key statistical data. This will give you a better overview and deeper understanding of each battle, allowing you to make targeted changes to your strategy.

⬤Right side: Displays the battle data of the selected Immortal or Fortification, split between four tabs. The following only covers the details for Immortal statistics. Select an Immortal on the left side to view its battle statistics.

1) Damage: Displays the composition and accuracy of the total damage dealt by the Immortal.

- Accuracy Data: Displays the number of hits, critical hits, and dodges, as well as their percentages.

2) Heal: Displays the composition and accuracy of the Immortal's total healing.

- Accuracy Data: Displays the number and percentage of successful and failed heals.

3) Dmg Taken: Displays the source of damage taken by the Immortal.

- Damage Source: Displays the number of damage instances, total damage, and damage percentage dealt by each enemy Immortal to the current Immortal.

- Skill Damage Percentage: Select an enemy Immortal in the Damage Source list to show how the enemy Immortal dealt damage to your Immortal (normal attacks, skills, skill effects, and others). 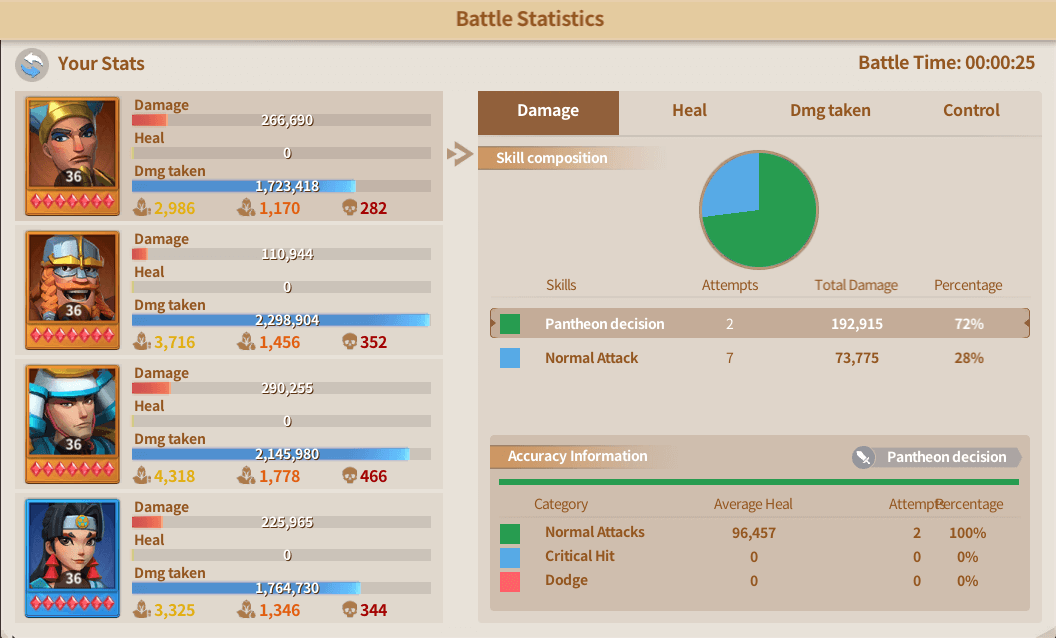 ⬤Boost Statistics: The City Info building at the center of the territory has been renamed to the Kingdom Statue. Tap this building and one of the buttons that pops up is the “Boost” button. Tap this button to view your territory's boost statistics. 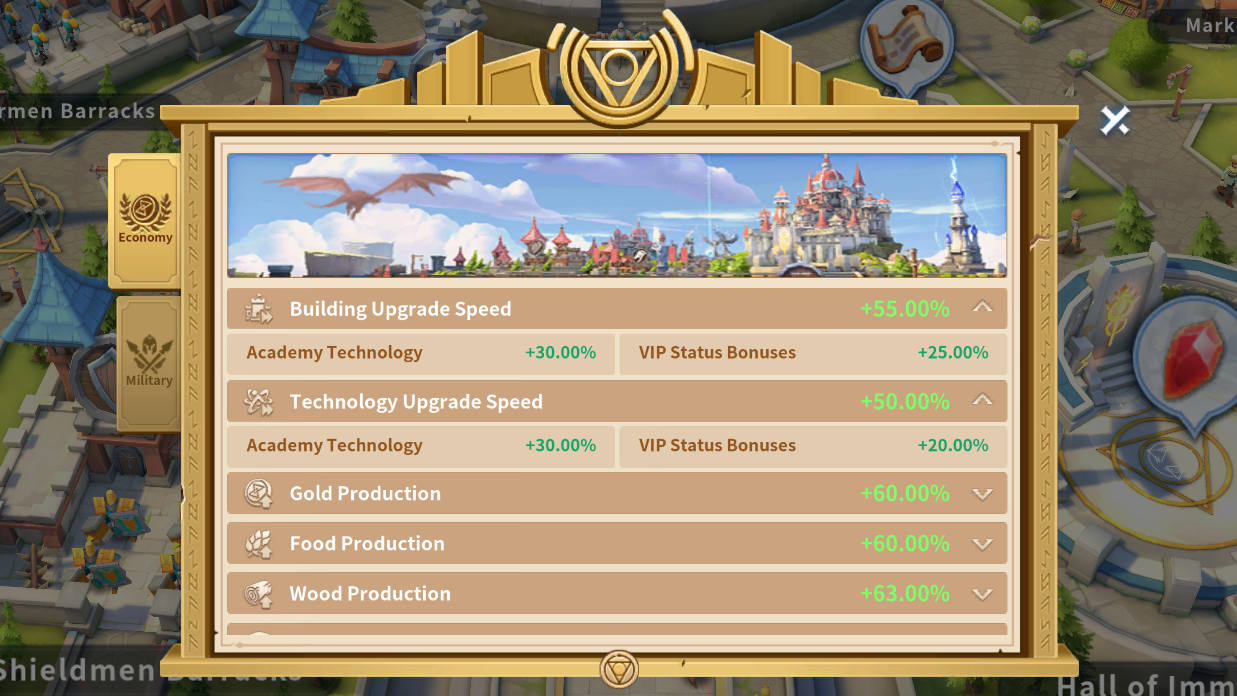 ⬤Artifacts: When upgrading or developing artifacts, you can now press and hold an artifact to view its attributes.

⬤Daily Deals: You will no longer obtain a chest when purchasing Daily Gifts from the Mystery Pearl Shop. Instead, the items will be sent directly to your Backpack.

⬤Update Login Event: With every update, we will be holding a limited-time login event. Log in daily during the event period to claim valuable rewards.

1）Optimized matching system. Matching is now based on Strength Evaluation instead of Power. Strength Evaluation calculates an Alliance's overall strength using more rational and comprehensive formulas. Elements that are included in the calculation are members' Power, activity level, victory rates, and previous attendance.

2）Optimized the end of battle interface.

⬤Loading Screen: Optimized the display of images on the loading screen for new players, so as to provide better guidance for new Lords.

⬤Himiko: When Demon Ambush rip open the space, the unit with the most troops in the enemy's back row will be pulled into the void.

⬤Trigger-type Skills: Trigger-type skills will no longer be triggered if the Immortal is under the effect of a control skill.

⬤Home Turf: Modified to grant a percentage bonus to Immortals' Attack when in battle with enemies in your Alliance's territory.

That's all the changes coming with the 1.6 update. Thanks for reading! If you have any questions, then please feel free to get in touch with us over Facebook, Discord, VK, or any other official channels. The new Throne of the Supreme is a long and punishing competition. Does it seem daunting, or is your fighting spirit roused? Share your thoughts with us on Facebook!