Summer has begun in the northern hemisphere, and Infinity Kingdom's latest update is coming soon as well. The keywords for Version 1.4 are 'crisis', 'teamwork', and 'substance'. With the arrival of unprecedented crises, two new large-scale events will be gradually made available to all Lords. In these events, you must work together with your allies to defeat powerful enemies. Infernal Assault is a conflict started by the resurgent Gnomes, while the Battle of Asteria is the result of a conspiracy that the Dark Alchemists have been planning for a long time. Our developers have also added multiple optimizations to improve the in-game experience. Steam rises from the Gnomes' expeditionary bases, and terrifying energy phantoms cry out... Are you looking forward to the coming conflicts? Read the patch notes to learn more about the coming changes, and get ready to defend Norheim!

The Gnomes have accelerated the restoration and development of their machines, and have now built Crusader Camps centered on Core Furnaces on Norheim. To shatter their evil plans, you will need to take part in the Infernal Assault with your allies, and destroy the Crusader Camps. Each Crusader Camp holds a large amount of Gold, which is necessary for raising dragons and forging Artifacts. Don't miss out on this large supply of Gold! Infernal Assault will be available following this update. Keep an eye on the Calendar, and take note of when the event starts.

1) Create a team - Once you discover a Core Furnace, you can invite your Alliance members to join your team and destroy the Furnace together. (Invitations can be sent to the Alliance chat channel, or to selected Alliance members.)

2) Join a team - You can also join teams if you receive an invitation from members of your Alliance. The max number of Lords that can join the team depends on the Crusader Camp's level.

3) Team bonuses - Bonuses will be activated when members join the team. All members who take part in attacking the campwill enjoy these bonuses. Bonuses can stack based on the number of members who join. The more members, the greater the bonus effect! (2 players: Physical Defense and Magical Defense boost / 3 players: Crit Rate boost /4 players: Physical Attack and Magical Attack boost / 5 players: Troops HP boost)

1) Searching - You can search for camps of specific levels from the Infernal Assault event interface. 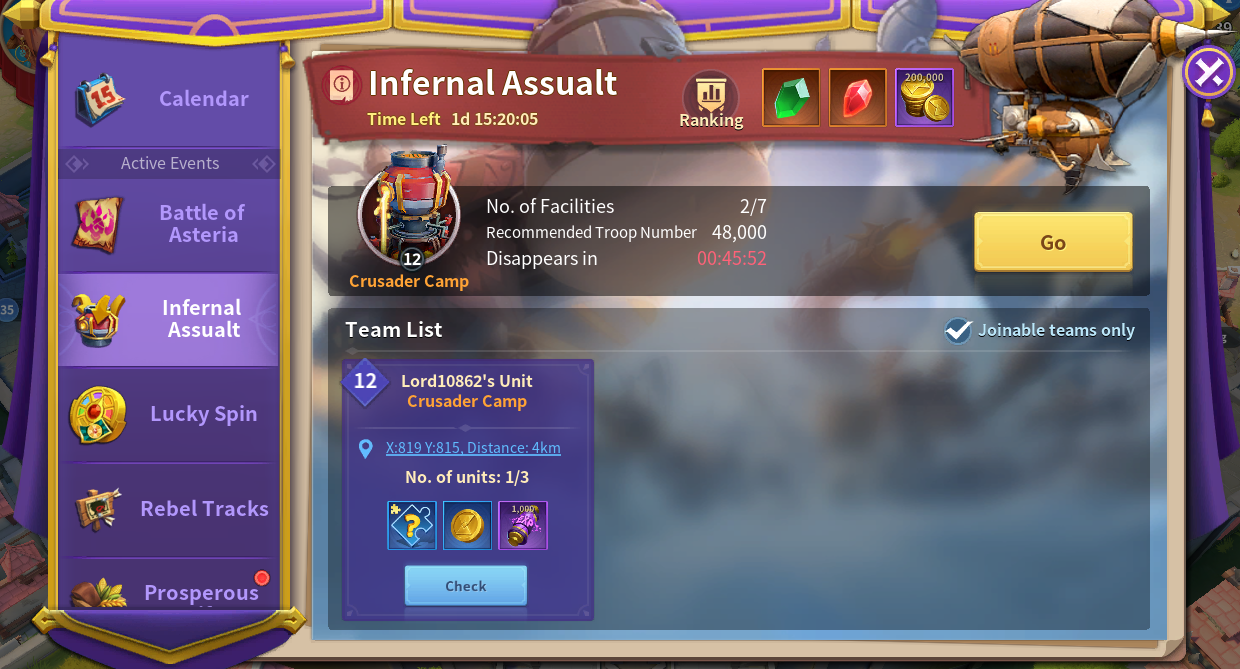 2) Level restriction - You must start by challenging Lv.1 Crusader Camp. The higher a camp's level, the higher its difficulty, and the more installations there will be surrounding it. You must destroy a camp of the previous level before searching for higher level camps. 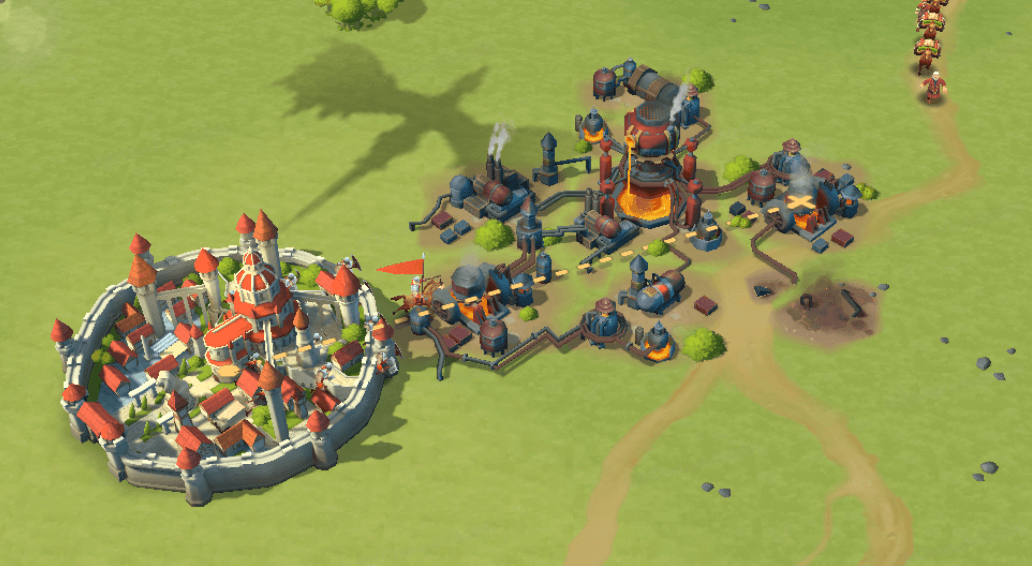 2) How to attack - You and your teammates must each your own troops to attack the Crusader Camp. Each Crusader Camp has a restore countdown timer. If you do not destroy the camp within the time limit, the base will restore fully. 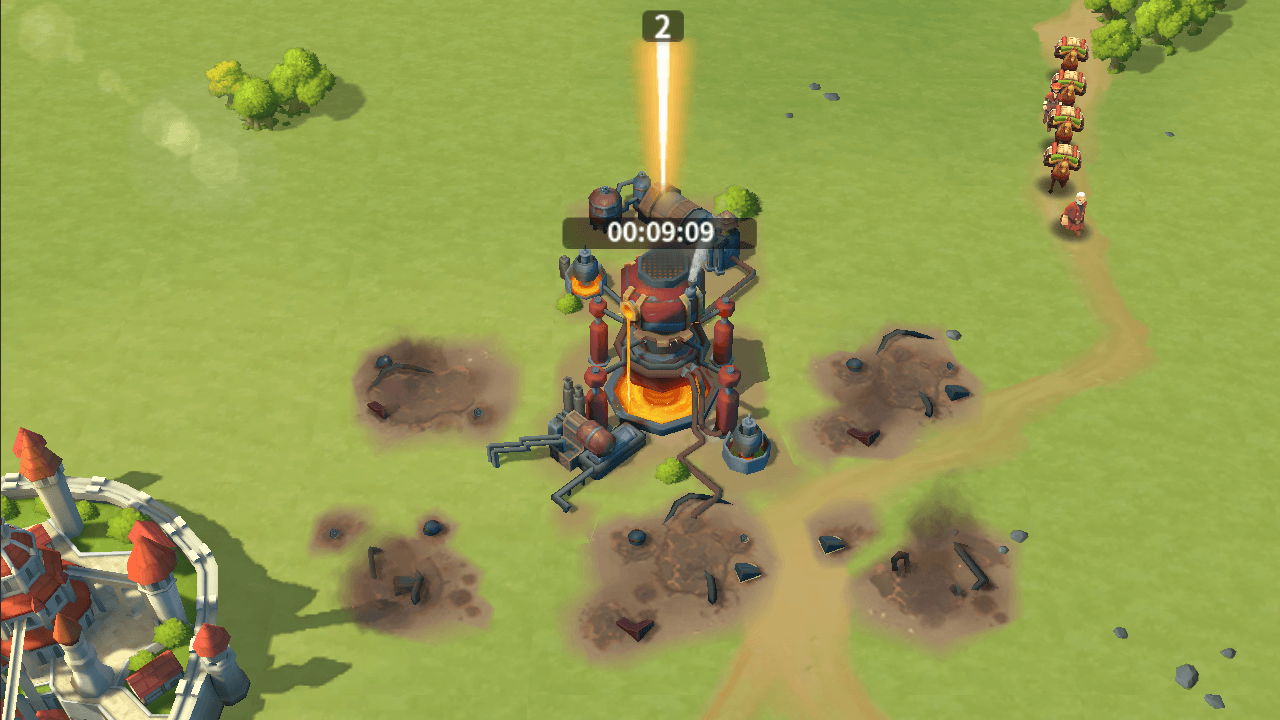 1) Destroy installations - All teammates who take part in attacking a Crusader Camp base will receive the same challenge rewards.

The Dark Alchemists have manipulated the continent's energy flows to create energy fissures. Upon these fissures, they then placed alchemical circles that distill the bursting energy into rampaging phantoms that attack Lords and soldiers indiscriminately. To protect the peace of Norheim, you must join the Battle of Asteria, find the energy fissures, and destroy these mutated lifeforms!

The Battle of Asteria consists of Solo and Alliance challenges: 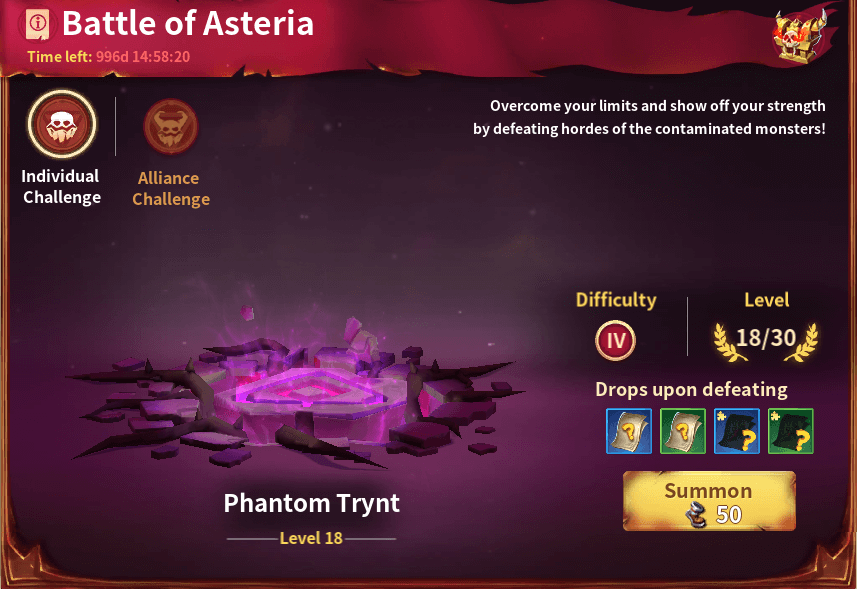 ⬤Challenge Rewards - Monsters in the Battle of Asteria drop valuable Artifact schematics, schematic fragments, speedup items, and resource items. It's a treasure hoard that's not to be missed!

3) Alliance Challenge Kill Rewards: Upon defeating a boss, all Alliance members who took part in the battle will receive rewards via mail.

4) Alliance Challenge Progress Rewards: Rewards based on the highest level boss defeated by your Alliance will be sent via mail when the event ends. The higher the level, the greater the rewards.

Himiko, the Shamaness-queen of Yamatai arrives. You can obtain her fragments via Theia's Roulette. You can check event dates and hours in the Calendar. Be sure to keep an eye on it! 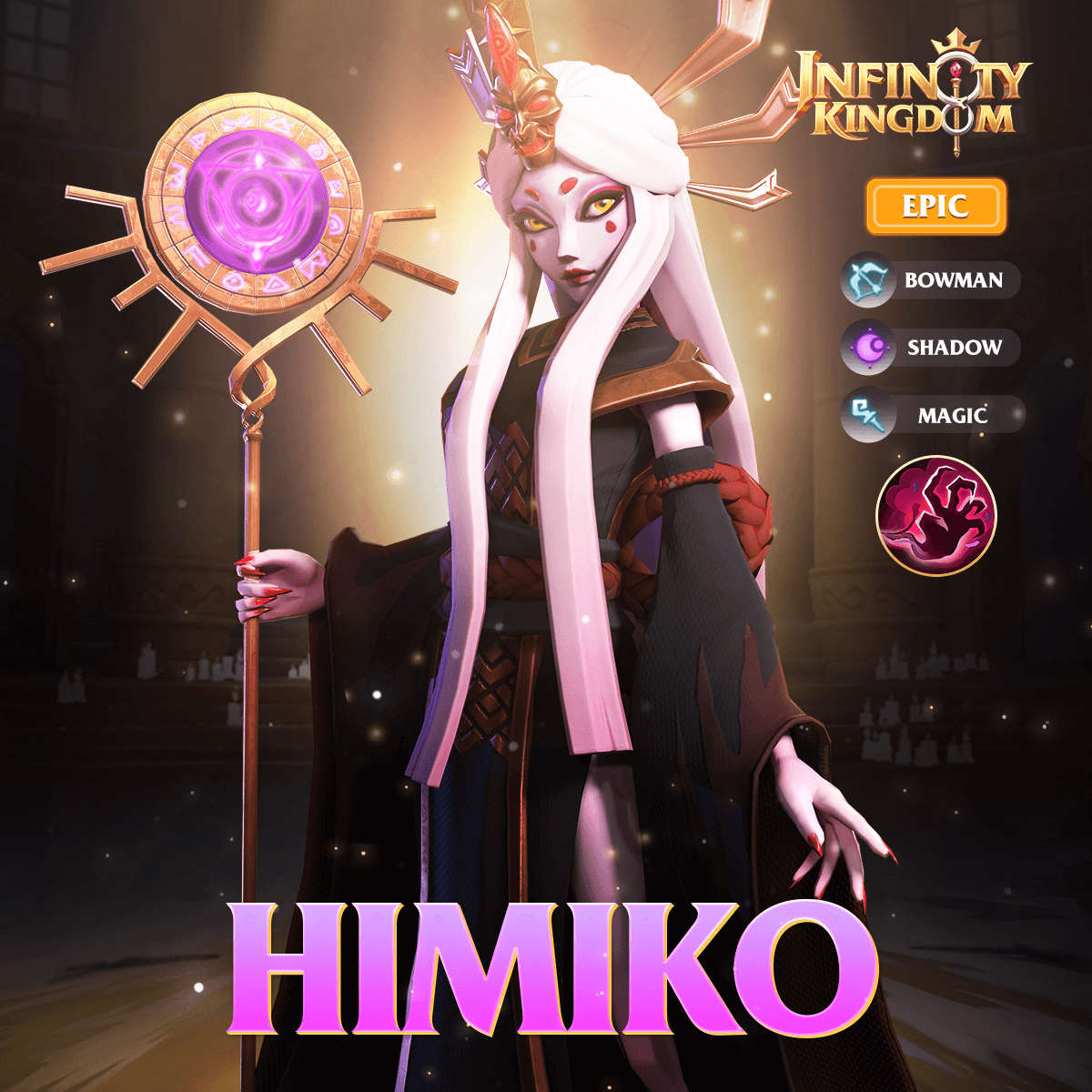 ⬤Ultimate Skill: Demon Ambush - Deals magical damage to all enemies. If there are more than two targets, the immense energy will rip space itself, sucking the enemy unit with the most troops into the Shadow World for 6s. Units in the Shadow World cannot attack or unleash skills, and cannot be targeted by normal attacks or skills.

⬤Enhanced immersion - Animations and special effects of the Evernight Labyrinth have been optimized. This makes collecting the three colored jewels more fun, and enhances the realism of triggering mechanisms.

⬤Tutorial - A more detailed tutorial has been added to guide Lords who are entering the Evernight Labyrinth for the first time.

We have replaced the previous automatic Alliance Leader impeachment system with a more reasonable one.

1) If the server has been open for three days or less, the Alliance Leader can be impeached if they have not logged in for 24 consecutive hours.

2) If the server has been open for more than three days, the Alliance Leader can be impeached if they have not logged in for 72 consecutive hours. Once an Alliance Leader has met the impeachment conditions, they will remain impeachable until they log in again or are impeached.

2) New Leader election - After impeachment has been initiated, an election for the new Leader will be held over the next 48 hours. At the end of the voting period, or when all members with voting rights have voted, the player with the most votes will become the new Alliance Leader.

4) Voting - All players with voting rights can vote once each. You are allowed to vote for yourself.

5) Impeachment failure - If the election ends in a tie or nobody places a vote, the impeachment will fail. Impeachment can be initiated again after a failure.

⬤Dissolving Alliances - A restriction has been added where Lv.5 or higher Alliances cannot be dissolved.

⬤Statistics mails - You can now set the time interval for Alliance statistic mails to 30 minutes, 1 hour, 6 hours, or 12 hours. This allows you to receive information at your desired pace.

⬤Alliance Mark - The display location of the Alliance Mark has been optimized to make it more visually coherent.

To increase the efficiency of communication in the Illusion Battlefield, we have optimized the display of crucial information, expanded the methods of receiving information, and provided a more detailed and complete battle statistics report.

⬤Optimized enemy/ally markers - quickly recognize yourself, your allies, and your enemies.

1) In the Battlefield: Territory names, troop marching routes, relocation destination markers, objective flags, and building names are now differentiated by color. Yours are yellow, allies are cream, and enemies are red.

2) Minimap: Member location markers, building markers, and portal area markers are now differentiated by color. Yours are yellow, allies are cream, and enemies are red.

3) Overview Map: Marching troops and territories are now differentiated by color. Yours are yellow, allies are cream, and enemies are red.

⬤Added push notifications for the following stages of the Illusion Battlefield:

1) When registration for the Illusion Battlefield begins, Alliance Leaders who meet the registration requirements will receive a push notification.

2) When you are matched with an opponent in the Illusion Battlefield, the primary forces and substitutes will receive a push notification.

3) 5 minutes before the start of the Illusion Battlefield pre-battle preparations, the primary forces and substitutes will receive a push notification.

4) 5 minutes before the Illusion Battlefield battle begins, the primary forces and substitutes will receive a push notification.

1) Change of status: Players who have been appointed to or removed from the primary forces, substitutes, or Commander status will receive a mail notification.

2) Registration status: When an Alliance successfully registers or unregisters, the primary forces and substitutes will receive a mail notification.

3) Commander appointment: When a Commander is appointed or dismissed, all Alliance members will receive a mail notification.

1) When the Hospital has no troops waiting to be healed, Heal cannot be used, and a tooltip will be displayed to indicate so.

2) When a territory's Prosperity is full, Sturdy cannot be used, and a tooltip will be displayed to indicate so.

When the battle ends, you can view a detailed battle statistics report for both sides at the Illusion Battlefield interface. Newly added statistical content:

1) Alliances are now matched based on the total highest historical Power of the top 40 players from among the primary forces and substitutes.

2) Reminders when an allied member is attacked by a rally are now sent when the enemy starts the rally. Previously, it was sent when the attack started.

While we respect freedom of speech, we also take a strong stand against abusive language, personal attacks, and fraud. Hence, we have introduced a chat reporting feature. We invite you to help us keep the chat a healthy and comfortable space for all. Please defend your personal rights while refraining from abusive speech.

⬤Penalties - Players who have been reported multiple times and are confirmed to have infringed upon our rules may be muted or even banned. Players who submit false reports may also be penalized.

Added the following tabs for Artifacts based on type: All, Attack, Defense, Range, Magic, and Support. You can tap each tab to quickly view all Artifacts of that type. This makes searching for the Artifact you want more convenient.

The starting level of cities is now shown on the World Map, Alliance Territories information panel, and City Info panel.

1) Added a tip for daily deduction of Lord Honor for high-ranking nobility.

2) Optimized the display of Lord promotion and demotion rules to make promotion conditions and reasons for demotion clearer.

Added a tip for max level Immortals. Immortals at max level cannot gain any more EXP, and so EXP earned will no longer be displayed for them.

Improved visual effects have been added to the panel for entering the Well of Time, Contention of Relics, and Illusion Battlefield.

⬤Baldwin IV: Chance of the ultimate skill's summoned tornadoes splitting changed to 75% for the first trigger and 25% for the second trigger. Previous trigger chance was always 50%.

⬤Chase: A cooldown time has been added to the original skill description of 'Each Crit has a 30% chance of dealing Magical Damage to all enemies.' The skill can now be triggered only once every 3 seconds.

⬤Dodge is now only effective against physical damage.

⬤The Energy Regeneration attributes on Artifacts have been doubled.

⬤Bloody Rage duration reduction of the Governor's 'Quick Repair' order has been lowered from 100% to 50%.

That's all the changes coming with the 1.4 update. Thanks for reading! If you have any questions, then please feel free to get in touch with us over Facebook, Discord, VK, or any other official channels. The Gnomes are on the move, and thick clouds of steam are rising from their expeditionary bases. Meanwhile, mutated energy is bursting forth from fissures in the earth... In this time of great crisis, will you bravely take up the call to protect Norheim, and fight against the forces of evil once more? Share your thoughts with us!